“Magnetism, the underlying principle behind electric motors and generators, relays and stereo speakers, is also the force that enables an important category of NDT tools called eddy current instruments. Eddy current testing is widely used in the aerospace industry and in other manufacturing and service environments that require inspection of thin metal for potential safety-related or quality-related problems.

“Magnetism, the underlying principle behind electric motors and generators, relays and stereo speakers, is also the force that enables an important category of NDT tools called eddy current instruments. Eddy current testing is widely used in the aerospace industry and in other manufacturing and service environments that require inspection of thin metal for potential safety-related or quality-related problems. In addition to crack detection in metal sheets and tubing, eddy current can be used for certain metal thickness measurements such as identifying corrosion under aircraft skin, to measure conductivity and monitor the effects of heat treatment, and to determine the thickness of nonconductive coatings over conductive substrates. Both field portable and fixed system instruments are available to meet a wide variety of test needs.

Eddy current NDT can examine large areas very quickly, and it does not require use of coupling liquids. In addition to finding cracks, eddy current can also be used to check metal hardness and conductivity in applications where those properties are of interest, and to measure thin layers of nonconductive coatings like paint on metal parts. At the same time, eddy current testing is limited to materials that conduct electricity and thus cannot be used on plastics. In some cases, eddy current and ultrasonic testing are used together as complementary techniques, with eddy current having an advantage for quick surface testing and ultrasonics having better depth penetration. 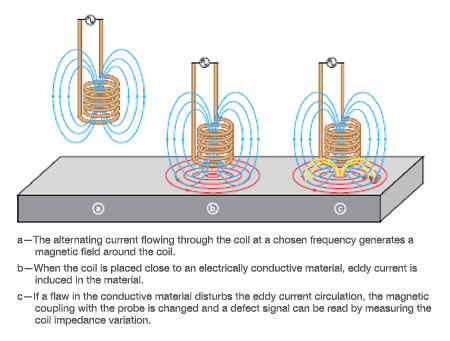 Eddy current testing is based on the physics phenomenon of electromagnetic induction. In an eddy current probe, an alternating current flows through a wire coil and generates an oscillating magnetic field. If the probe and its magnetic field are brought close to a conductive material like a metal test piece, a circular flow of electrons known as an eddy current will begin to move through the metal like swirling water in a stream. That eddy current flowing through the metal will in turn generate its own magnetic field, which will interact with the coil and its field through mutual inductance. Changes in metal thickness or defects like near-surface cracking will interrupt or alter the amplitude and pattern of the eddy current and the resulting magnetic field. This in turn affects the movement of electrons in the coil by varying the electrical impedance of the coil. The eddy current instrument plots changes in the impedance amplitude and phase angle, which can be used by a trained operator to identify changes in the test piece.

Eddy current density is highest near the surface of the part, so that is the region of highest test resolution. The standard depth of penetration is defined as the depth at which the eddy current density is 37% of its surface value, which in turn can be calculated from the test frequency and the magnetic permeability and conductivity of the test material. Thus, variations in the conductivity of the test material, its magnetic permeability, the frequency of the AC pulses driving the coil, and coil geometry will all have an effect on test sensitivity, resolution, and penetration.

There are many factors that will affect the capabilities of an eddy current inspection. Eddy currents traveling in materials with higher conductivity values will be more sensitive to surface defects but will have less penetration into the material, with penetration also being dependent on test frequency. Higher test frequencies increase near surface resolution but limit the depth of penetration, while lower test frequencies increase penetration. Larger coils inspect a greater volume of material from any given position, since the magnetic field flows deeper into the test piece, while smaller coils are more sensitive to small defects. Variations in permeability of a material generate noise that can limit flaw resolution because of greater background variations.

While conductivity and permeability are properties of the test material that are outside of the operator’s control, the test frequency, coil type, and coil size can be chosen based on test requirements. In a given test, resolution will be determined by the probe type while detection capability will be controlled by material and equipment characteristics. Some inspections involve sweeping through multiple frequencies to optimize results, or inspection with multiple probes to obtain the best resolution and penetration required to detect all possible flaws. It is always important to select the right probe for each application in order to optimize test performance.”

By Tom Nelligan and Cynthia Calderwood

Do you need more information about our products?.
Please contact us here.